After leaving the Coal Board, Frank joined the Royal Navy in June 1942. He was trained at HMS Collingwood and after exams was allocated to the Combined Operations Division and to Landing Craft Infantry.

He was sent to America to collect Infantry Landing Craft L.C.I.[L]380 and sail it back home. It was approximately 150 feet long and 25 feet beam, flat bottomed and bobbed around like a cork in a bucket. Not the ideal craft to cross the Atlantic
in!

Frank was the signalman on L.C.I.[L]380 and their task on 6 th June 1944, D Day, was to take two hundred troops from 2 nd Battalion Kings Shropshire Light Infantry from Newhaven to Sword Beach, landing on Queen Red Sector at 07:25 am. As they approached the beach, they received a direct hit which set fire to the No 2 troop space and also holed the craft on the water line.

Quite a few men on board were badly injured and had to stay on the ship. The other troops left the ship by the side ramps. Under heavy machine gun fire they landed in about 4 foot of rough water. If they fell down and went under, the weight of equipment they were carrying made it impossible for them to get up without help. To overcome this the Captain of the craft sent Frank to take a message to the officer at the bow of the craft, instructing him to put two ropes across to the shore that the soldiers could use to help them stand and get safely ashore. Frank said that he did so and, made the journey to the bow and back to the bridge “faster than Usain Bolt”!

Frank spoke of his abiding memories of D-Day being the thunderous noise and even more so the sight of the bodies of young men rolling in the surf; lads whom he had been speaking with only minutes before. Frank considered that he was lucky, many were not.

After about 4 hours stranded on the beach, they were able to undertake temporary repairs and get the craft floated off the beach. They limped back to

Newhaven where the craft was hoisted out of the water for repairs to the hull to be undertaken. The repairs were completed overnight and Frank and the Infantry Landing Craft were heading back to Normandy the following day with another load of soldiers. These shuttle runs continued for the remainder of the war, landing further along the coast as the Liberation of France moved onward.
Frank always remembered his Royal Navy service and was an active member of the Sheffield Normandy Veterans group.

He made a number of return visits to Normandy in later life and one that made the most impact was in June 2019. He was asked to give a speech at Bayeux Military Cemetery to record his D Day memory to mark the 75 th Anniversary, which he did in front of The Prince of Wales, the Duchess of Cornwall, Prime
Minister Theresa May and many other dignitaries. This turned out to be very moving, which was evident to all in attendance. His last visit was in October 2021 when, as part of the visit, he visited the British Normandy Memorial at Ver sur Mer. This Memorial was close to Frank’s heart as it is inscribed with the names of the 22,442 under British command who never returned from Normandy. Frank was appointed as an Ambassador for the Memorial and was successful in raising over £20,000 towards its completion and for the planned development of an Education Centre.

After the war, in 1946, Frank returned to the Coal Board and eventually became the Director of Purchasing and Stores. He married his wartime sweetheart, Pat, in 1947 and they had a long and happy 65 years together. Frank has two daughters,
6 grandchildren and 5 great grandchildren. 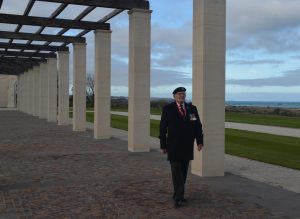