On 4th May Ken Hay, MBE Leg.d’hon was invited to speak to year 8 pupils at the Priory School Southsea, their teacher Joanna Snewin told us that they had a fantastic day and the day after the pupils were “still buzzing”. His effort to be with them was very much appreciated.

Like many Ken’s war was tough, he was captured at Normandy, then a POW in Poland where he was put to work in the mines until they were liberated . He then undertook The Long Walk to Freedom.. He is amazingly articulate and has the incredible ability to interact and hold the attention of young people. 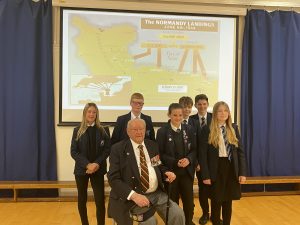