History of WarA military history encyclopedia on the Web.

SpartacusThis is a history educational web site aimed at schools.

BBC’s Peoples WarOnline collection of stories and memories about the Second World War.

War DetectivesWar Detectives is a part of The Big Lottery Fund’s “Their Past Your Future” scheme. The site invites young people to explore the experience of the Second World War.

Recollections of WW2This site links to thousands of oral history recordings with people who experienced WW2.

ParadataBringing together the experiences of the men and women of Airborne Forces with the official records and regimental history.

The importance of D-Day BBC Newsround have put together a helpful page explaining what D-Day was and why it was so important.

Normandy TourismThis website can be translated into English by selecting the UK flag and it provides some interesting information about Normandy Tourism.

The Cars, Tanks and Planes of WW2

The 24 Hour MuseumThis is UK’s national virtual museum, includes a teachers’ section and links to a zone for children.

Juno Beach CentreAn online museum on the Canadian war effort with information on the new visitor centre at Juno Beach, Normandy ( available in French or English).

Airborne AssaultThe new Museum of The Parachute Regiment and Airborne Forces is now open at Duxford in partnership with the Imperial War Museum.

D-DAY: THE SOLDIERS’ STORY, to be published by John Murray on 20th September.
It is focussed on the young soldiers who fought on the beaches of Normandy.
There is more information on the website: www.gilesmilton.com
There is even a citing of General Martin in the book who founded the trust. 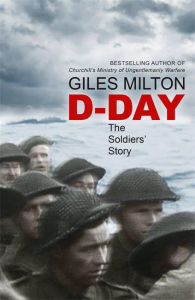