Warrant officer Baz Firth, one of the Trustees of the Spirit of Normandy Trust reached a milestone in his career in the Royal Navy on Friday 8th October. The day marked his 1,000th day as Base Warrant Officer at RNAS Yeovilton and Mess President of the WO’s, SR’s and Sgts’ Mess. It was also his last day at Yeovilton as he is moving to the Royal Navy Leadership Academy as the Executive Warrant Officer responsible for Dartmouth, Collingwood and the Outdoor Leadership Training Centre at Talybont. An emotional day for Baz and we wish him well in his new role. 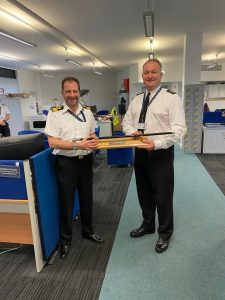