A serving Army Officer has raised over £9,000 in support of the Spirit of Normandy Trust. Major General Darren Crook, along with his running partners Tim Eggett and Mike Jeavons planned to run along the Normandy Beaches from Utah Beach to Pegasus Bridge a distance of 44 miles. When Covid stopped all travelling to France. Undeterred, Darren and his team changed their location and ran along the Dorset Coast from Studland Bay to Portland, an area with great significance to the D Day landings, covering the same distance as originally planned, but over a much more undulating terrain.

Sponsorship for the run was arranged through Just Giving and over £9,000 has already been raised. Darren presented a cheque for £9,150 to Richard Palusinski, Chairman of the Spirit of Normandy Trust in the grounds of Beechfield House Hotel, Melksham, Wiltshire this morning (Tuesday).

We are deeply indebted to Darren and his team and would also like to thank Beechfield House Hotel, Melksham for allowing us to use their venue and to Richard Gardner and Nigel Peare for bringing along their WW2 jeeps. 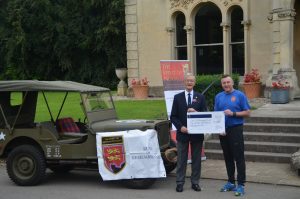