It is with great sadness that we have heard of the passing of Dame Vera Lynn today at the great age of 103.  She was a symbol of the resilience and stoicism of the war years. We’ll Meet Again became the song that would encapsulate the indomitable spirit of the World War 2 generation, words recently recalled by Her Majesty the Queen when speaking of the nation’s response to the Covid19 pandemic. Dame Vera will be widely mourned and greatly missed.  Our condolences go to her family at this sad time.

This morning a brief presentation took place outside the school gate of Sutton Benger Primary School.  Kyan Terry-White, aged 5, was very highly commended in our recent VE75 poster competition. Entries were received from all over the UK as well as from France and Luxembourg.  After the judging it transpired that Kyan attended a school close to where the Chairman lives.

Trust Chairman Richard Palusinski presented Kyan with a certificate and some items of Trust memorabilia. Major General Darren Crook, Director of Land Equipment,  also attended the event and presented Kyan with the Major General’s medallion,  inscribed with the words”what have we done for them today” in recognition of the contribution that Kyan has made to the veterans.

Kyan had declined a cash prize saying that he would rather that we used the money for the benefit of the veterans.  His mother Isabel said that she was very proud of Kyan’s thoughtfulness.

Our thanks also go to Mr Maddison, Headteacher, for allowing the presentation to take place. 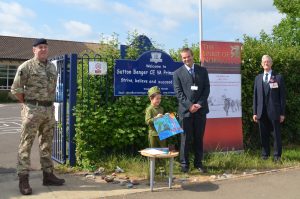 Please click on the below link to view The Spirit of Normandy Trust D Day 76 Commemoration Video.