WWII veteran, Hector Duff came into Ramsey Grammar School on Friday 13th December to present awards to students who had entered the Spirit of Normandy Trust, History Competition while they were in Year 9.

Students had produced “Tell Me’ projects based on their relatives experiences in World War Two. All students also received a D Day 75th Anniversary badge. Phoebe Cleator’s entry in particular impressed the judges and Phoebe who earlier in the year received the Hector Duff History Trophy was awarded a Highly Commended certificate for her project on RAF Jurby. Students then had lunch with Hector.

Hector also took the opportunity to give 8A an impromptu history lesson on his experiences during D Day in June 1944.

Earlier in the day Andy Perry of the Isle of Man Post Office attended the Year 10, assembly to present certificates and book tokens to students who had entered a competition where they had to imagine sending a letter from the front to home during the War. The students had to imagine that soldiers and their families had access to modern technology, such as Facebook, Twitter and Instagram. The entry of Ruby Grant and Althea Mallorca were singled out for special praise.

At the assembly, other students who produced notable “Tell Me” projects about their relatives lives in the 1950s and 1960s also received certificates. Oscar Bovenizer’s project was highlighted for excellency and he received a book as his prize. 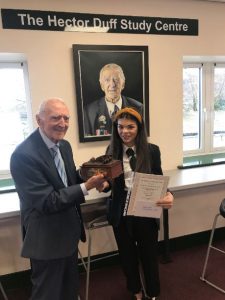 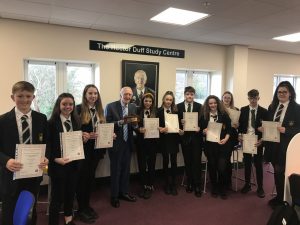 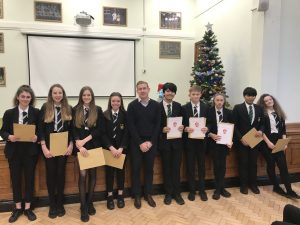 Winners of the Young Historian Project receive their certificates from Head of Year, Darren Lillie. 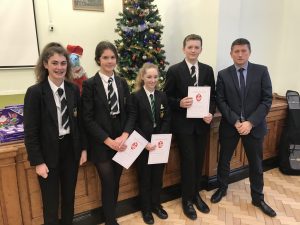