It is with great sadness that we have received news of the passing of Hector Duff of the Isle of Man at the age of 101. Hector was the worthy holder of the Military Medal, the French Chevalier de la Legion d’honneur,the OBE and the IOM Tynwald medal. Hector was a great supporter of the Spirit of Normandy Trust in many ways, but especially of  SONT’s Young Historian Project. This year the first Hector Duff Prize was awarded to Ramsey Grammar school where Hector visited last month to present the prize and YHP certificates. He was keen that children should understand the reality of war and continued to speak in schools on the Isle of Man. This award will continue in his memory.

Having served his country in the Army both in Africa and Europe he went on to serve his community in the Isle of Man Constabulary.

We offer our sincere condolences to Hector’s family. He will be greatly missed by so many.

Hector outside of Bayeux Cathedral 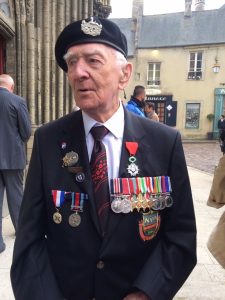