Please read all about our Young Historian 2018 awards ceremony and mini reunion by clicking on this link. Prizegiving Newsletter 2018

The Key Stage 3 winner was won jointly by Jelin Fernandez from St Bede’s and St Joseph’s School in Bradford who produced a detailed analysis of the effects of cracking the enigma code. Jelin Fernandez project

…and Emily Leeming of Langley School at Loddon, Norfolk, who produced a thorough and sensitive consideration of the evacuation. Emily Leeming project.docx

Also recognised for their highly commended work at KS3 were:

In addition to the year group prizes, The Spirit of Normandy Trust has a special prize that is only awarded if there is an outstanding entry. The award was given to Jed Mussell who spent some time with veteran, Ken Hay MBE JP L,dhon learning about his experiences as a prisoner of war. Jed then wrote a narrative based on much of what he had learned from Ken, which follows the experiences of a solider who was wounded in action and taken a prisoner. The award was fittingly presented by Ken Hay. Jed Mussell Project 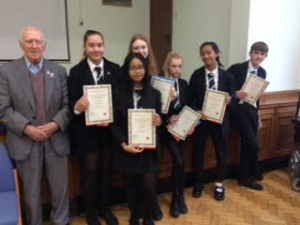 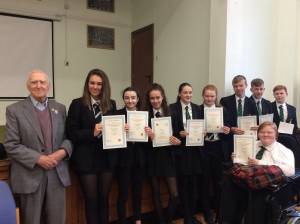 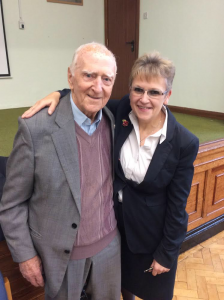