Angus Robertson- “This is the story of my father’s D-Day – from training in the Moray Firth scrambling down nets on ferries into Landing Craft and practice beach assaults with live rounds to crossing the channel, landing on Sword beach and meeting the 21st Panzer Division at the Bois de Lebisey. Told accurately and with British understatement the film is a testament to a generation of men and women who got on with what they had to do, without fuss or favour.
Captain Adrian Robertson, 2nd in Command, B Company, 1st Battalion, Royal Norfolk Regiment (1920 – 2015)”.

Thank you to Angus for sharing.

Working in close liaison with the Young Historian Project, the Trust awards annual prizes for essays submitted by schools throughout the country relating to World War 2 events and their historical significance. Deadline for entries is Mid July. Perhaps you know a school who has already done some work/ plans to do some work on this and could therefore submit their work. Further details on the categories and submissions can be found here.

We have been approached by a film company based in France who would like to interview veterans who fought against the 12th SS Panzer Division, particularly in the battle for Caen. Julien Johan (director of Children’s war, 2018) is preparing a historical documentary film. Produced by ZED, it will be broadcast on the main national public broadcaster, France 2. Zed is also in discussion with National Geographic.

We have no editorial control over the making of the film and cannot guarantee the line that the makers will take. If you would be interested in participating in the filming please feel free to contact them direct via email chratiney@gmail.com or on mobile phone +33687295708 to speak to Christiane Ratiney assistant to the director of Zed productions. 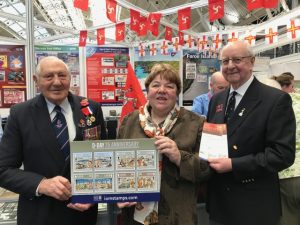 BBC Wales are keen to contact any Welsh Normandy veterans to record personal interviews of their involvement in the Normandy Campaign. The plan is to archive the recordings as an oral history record.