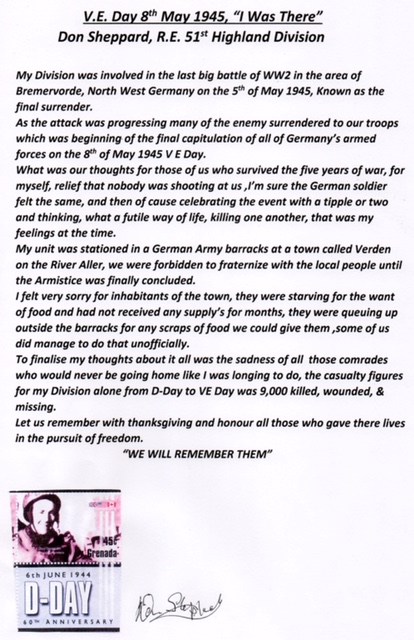 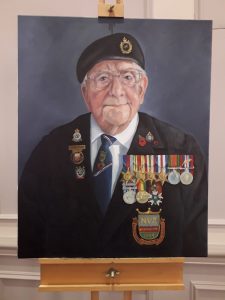 Harry was serving on HMS Eastway as a Signalman in the Royal Navy.

Just before the German Surrender, the Ship was in he Mediterranean.
2 weeks before VE day the ship left Gibraltar to sail back to Liverpool. When passing the Bristol Channel They were made aware of HMS Bulldog searching for a German Submarine believed to be in the area. Whilst he was on lookout patrol Henry reported seeing the wake of a Torpedo heading toward the Eastway. Luckily although it was only a few feet away. It passed the bow of the ship and they survived unscathed. Even at this late time in the war, the dangers still existed.
After a quick visit to Liverpool to pick up supplies. HMS Eastway was deployed to Newcastle. This meant having to go around Scotland and into the North sea. Obviously after the experience near Bristol everybody on board was on high alert.
Harry arrived in Newcastle the day before VE day. This enabled the ship to receive some well needed maintenance.
The surrender was announced and as a crew they thought they could all go ashore to celebrate. This however was not the case. Harry and approx half of the crew had to stay on board as the Ship was still classed as operational.
As you all know VE day meant the end of the war with Germany. But not with the Japanese.
Soon the order came that they had to sail to Ceylon, now Sri Lanka to a port called Trincomalee. They picked up troops and then Sailed on to Rangoon in Burma now called Myanma. My final destination for the war was in Singapore shortly after the Japanese surrender.
I had survived. HMS Eastway then sailed back to Sri Lanka where I was released from the crew and waited to be repatriated back to England. With many other servicemen I waited to find a ship that would get me back home. Eventually I boarded HMS Formidable and arrived back in Portsmouth October 1946. I was 20 years old
Overall I was a very lucky man compared to other shipmates and servicemen. I as many will say. Was a lucky man. My service in the Navy at this time was in someway the making of me. The comradeship and trust you had with your shipmates helped you through the dark and sometimes dangerous times. And finally in traditional terms
I was a Jolly Jack Tar who has never lost my pride in what I did 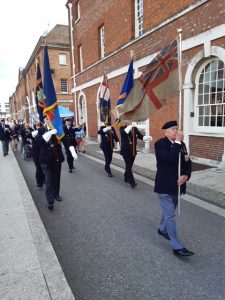 I was a shell loader on LCGL (Landing Craft Guns Large) No 939 to France and No 449 to Singapore, Burma and Sumatra. On board were 2 x 4,7” ex-destroyer guns and 2 Oerlikon guns

We were in Singapore on VE Day and on VJ Day formed the Guard of Honour when Earl Mountbatten (later Lord Mountbatten) accepted the surrender of the Japanese. 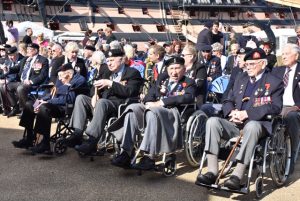 On VE Day we were getting ready for the next patrol in the Malaca Strait. A 1500 mile trip from Trincomalee to get to our Billet (Patrol Area) We were happy the war in Europe was over but apprehensive about our future in the Far East. 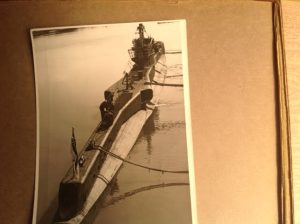 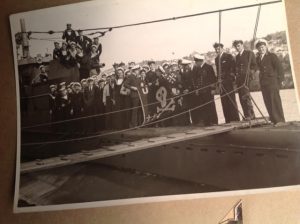 On 7th May 1945 I was ordered to catch a train from Hanover, in central Germany, and go to Bruges in Belgium. I was then to continue to the UK where I was to prepare to be part of the invasion of Japan just as I had been for Normandy.
I got on the train which had been boarded up so I couldn’t see out and there was only a dim electric light in the carriage. That was because there were German boys who had been given guns, to shoot any Allied soldiers they could see. The boarding on the windows protected us in the train.
I spent most of the 30 hours sleeping or reading as we had no radio.
It was only when we reached Bruges in the morning of the 9th May, and got off the train, that we heard the wonderful news that the Germans had surrendered unconditionally – the war was over in Europe.
All the celebrations had taken place the day before I arrived in Bruges, but the excitement was still going on. A huge fuss was being made of all Allied soldiers but I had to continue my journey to the U.K.
By the time I arrived in London people were already settled down to trying to rebuild their lives and there was still the Japanese war to be won.
I heard all about the singing in the streets and dancing in city centres with complete strangers but I was too late.
I had completely missed the end of the European war. I was the last person in the world to know that the European war was over! 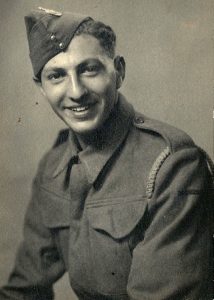 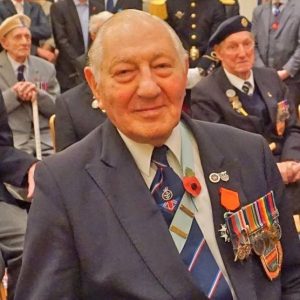 I had arrived back in England on Friday 4 May from being a POW, slave labour in a coal-mine in Poland, and having endured the Long March to Freedom (23 January to 20 April), aged 19. Having been processed and kitted out with a new uniform, I reached my home in Barking on Sunday 6 May. Still suffering from the effects of dysentery, I wasn’t able to go far from toilet facilities for a day or two but, come Tuesday 8th – VE Day – things were on the mend. However, presumably due to my ‘change in life-style’, it transpired that I was suffering from some form of temporary amnesia as I had several embarrassing incidents later when people mentioned things that occurred at that time and I had absolutely no recall.
VE Day. I think that, with my family of Mum & Dad, 4 sisters and a younger brother who was nearly 4, I spent the day listening to the wireless (when did it change to radio), telling of events throughout the country and particularly Churchill’s speech “This is your victory”. After tea, as a family we went off to our Catholic Church for a Service of Thanksgiving. I had sent a telegram to my brother Bill, aged 24, who was serving with our Battalion in Great Yarmouth, asking if he could get leave and, as we walking home from Church, I heard running steps, looked back and it was Bill. The last time I had seen him was out on the night patrol in Normandy on 7 July 44, before the battle, when I got captured. Bill got back to our lines but was badly wounded 2 days later and repatriated to England – truly a case of me going East and him going West – but of course I knew nothing of this. We flung our arms around each other and went off home with the family.
Later, Bill wanted to go back up to the town centre to see what was going on so, he and I in uniform, and a civvies pal of his, went out and it seemed like the whole town were out on the streets. At one point a group of girls spotted us and demanded a kiss. This caught on and we were simply besieged with kisses. Ah happy days.
And to think that only 3 weeks before, I was unwashed, unshaven, covered in lice and very weary after walking over 1,000 miles. It’s a funny old world.
From Ken 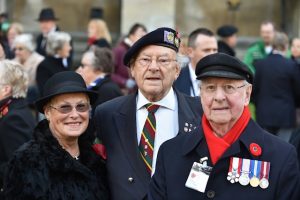