Congratulations to Hector Duff, who was given a fantastic surprise to mark his 101st birthday – by being reunited with one of the war vehicles he drove. Hector (in the front of the picture), served with the 7th Armoured Division, nicknamed the Desert Rats, due to their service in North Africa, between 1940 and 1945.
The veteran, who also took part in the D-Day landings, was awarded the Military Medal for bravery. Thank you for you amazing service, Hector. 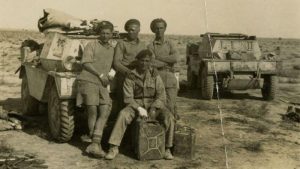 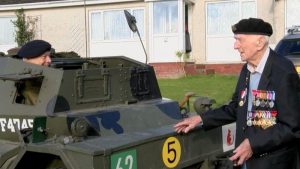 It is with much sadness that we learned that the our friend and Bristol Veterans Chairman, Ken Turner sadly passed away yesterday. A lovely man and passionate supporter for the Veterans.

Ken arrived with the 7th Royal Tank Regiment at Normandy a number of days after D-Day to carry out daring reconnaissance missions behind enemy lines.

They were high risk and the men frequently came under fire. For Ken, who was a lance corporal, his war in France came to an end when a German bomber disguised as an Allied plane made a direct hit on his and his two comrades’ tank.

One of the crew died instantly and the other is believed to have died later of his wounds.
Ken said: “The bomb blew my tank to smithereens – my two crew members were killed. How the hell I escaped with only injuries I will never know.”
Shrapnel in his back was removed by medics before he was flown for care to a hospital in Cardiff, but a metal nut which lodged itself in his neck was only removed 20 years ago after an X-ray revealed its location. It is now displayed in a box in his home.

Ken said: “It is a reminder of the war and two men in my tank team who did not survive that blast.”
The event also had a life changing outcome for Ken, who had originally lied about his age when he joined the army at just 16 and while he was in hospital, a group of women from a nearby munitions factory organised a party for the wounded soldiers.

Ken said “That German pilot did me a favour because that’s when I met my wife Betty, back in hospital.”

After recovering from his injuries, Ken continued his military service in Italy until the Germans surrendered.

He was demobbed and married Betty, the couple going on to have a son, Paul, and daughter, Carole.
Ken said it was important to remember those who died in the war.

He said: “It must be a lesson to ensure it never happens again.” 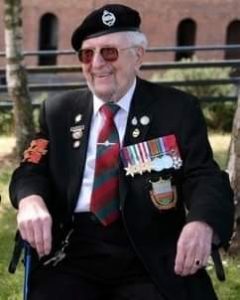 The 5th November 2020 should have been the annual Field of Remembrance service at Westminster. Abbey. The Spirit of Normandy plot (formerly the NVA plot) will still have the Remembrance Poppies set in place ,but regrettably be no participants are permitted.

Ken Hay MBE, Leg.d’hon was to have accompanied SONT Vice Chairman Ian Stewart CM. The featured photo is a picture of Ken, Pat Pridham and Ian at the plot 2 years ago.

We will Remember Them 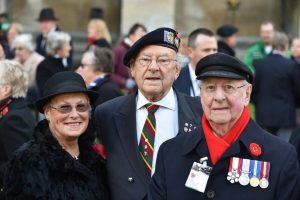 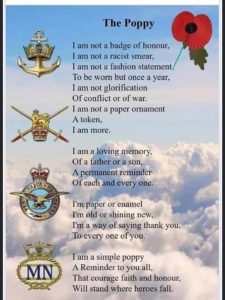